Jinja is a template language, based on the programming language Python. It can be used within HTML code and as a simpler alternative to Python in tools such as dynamic insight.

One of the primary use cases of Jinja is to use it to define and refer to variables. In the first step, a variable is defined in a JSON dictionary:

This will output: Hello John!

Logic, such as if-else logic, can also be used in Jinja:

Based on the variables defined above, this would output: John is 30 years or older.

How Jinja is used in dynamic insight

1. Referencing to previous steps and connectors in a flow

Similar to the variables example stated above, Jinja can be used within dynamic insight to reference to previous steps in a flow. For example, the flow could consist of a Dict Helper and Freshsales Connector: 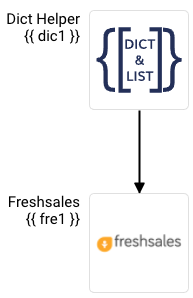 The Dict Helper (dic1), in this example, contains the following dictionary:

In order to refer to those values in the Freshsales Connector, Jinja needs to be used. To do so, one needs to enter the entire path to the value which should be referred to. The path, in this example, consists of:

The elements of the path are separated by dots, and the entire path is wrapped in double curly brackets. By using that schema, the reference to the first name is:

The references to the fields are written into the Freshsales connector, such as: 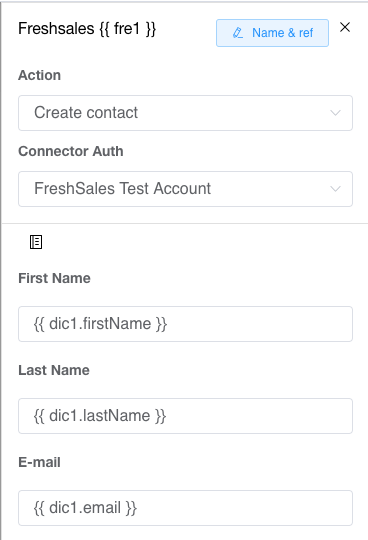 When the flow is run, the Freshsales connector receives the following input data:

You can find out more about referencing using Jinja here.

2. Using functions and filters to format and change data

Functions and filters in Jinja are similar to Excel functions; they can, for example, change date formats, replace certain words and letters, or capitalize words.

In the previous example, the first name is given in lower case ("john") by the dict helper; in order to send "John" to Freshales, i.e., capitalizing the first letter of a word, one can make use of the Jinja capitalize filter. Using a filter is as simple as using a pipe (|) after the variable which should be changed:

When the flow is run, the Freshsales connector now receives the following input data:

Sometimes one might want to use logic in a connector input to change the input depending on the inserted value.

If the email would not contain an @ symbol, e.g., john.doeexample.com, the Freshsales connector would receive the following input data for the email field:

The official documentation, which includes most of the Jinja functions which you can use in dynamic insight as well as extensive explanations of the correct syntax, can be found here.

In order to test your Jinja code, you can use a third party Jinja live parser. Please note that you should not enter any confidential information (such as company or customer data) in such tools, as they might store your input data.

A
Alexander is the author of this solution article.